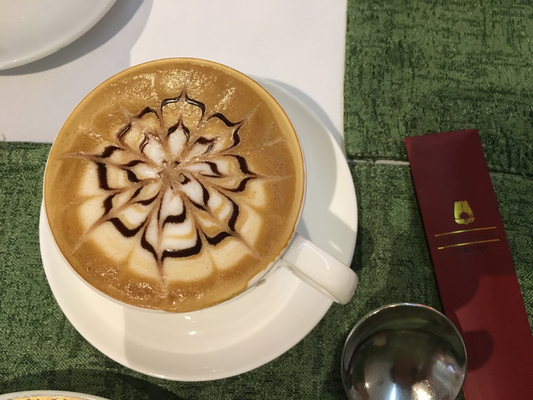 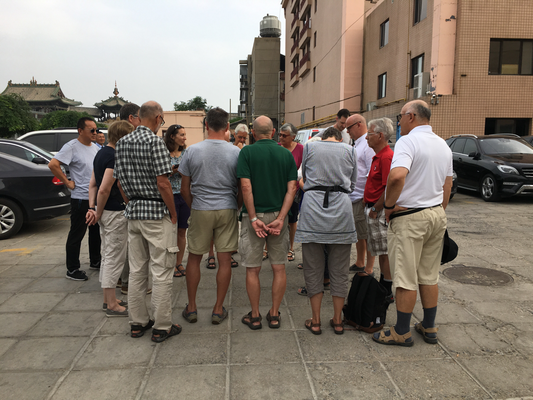 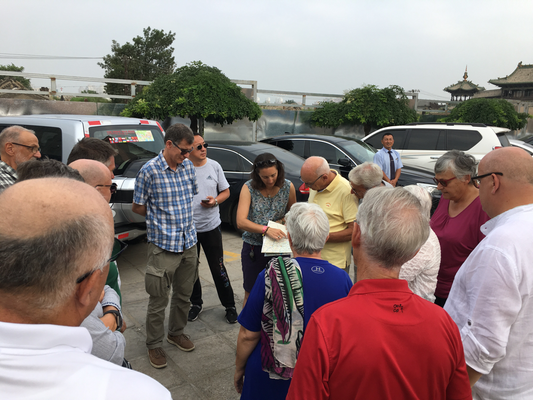 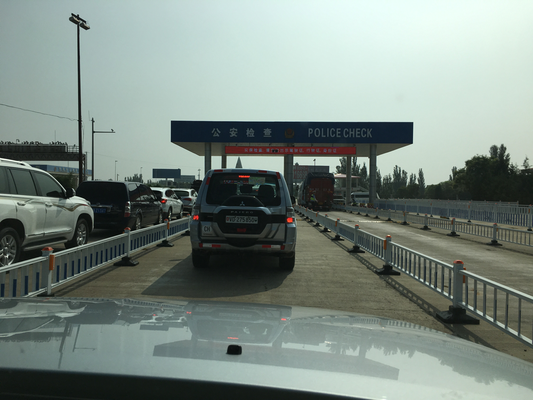 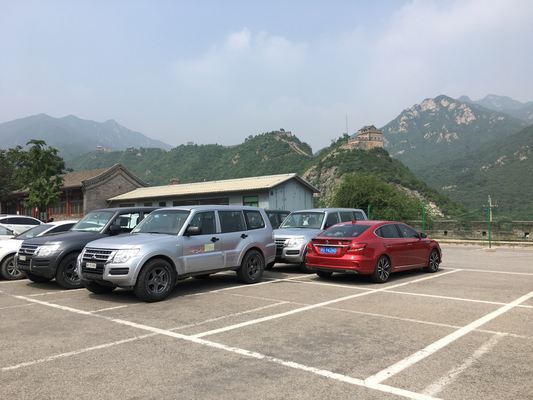 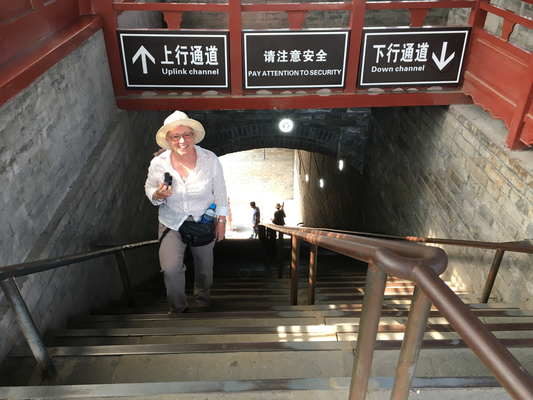 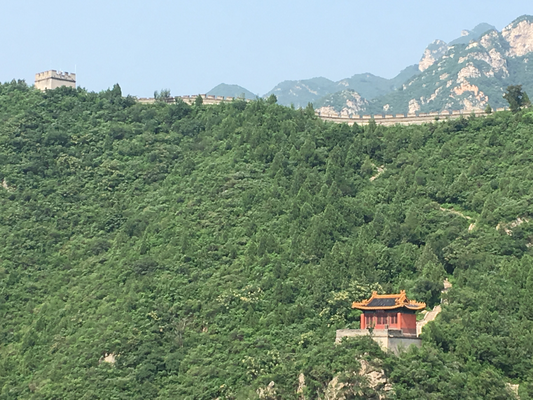 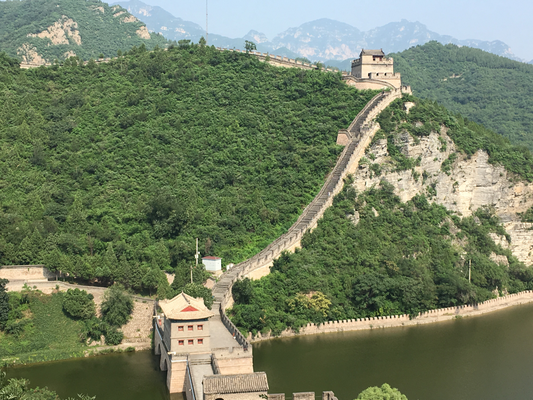 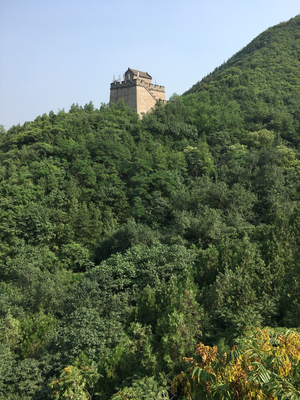 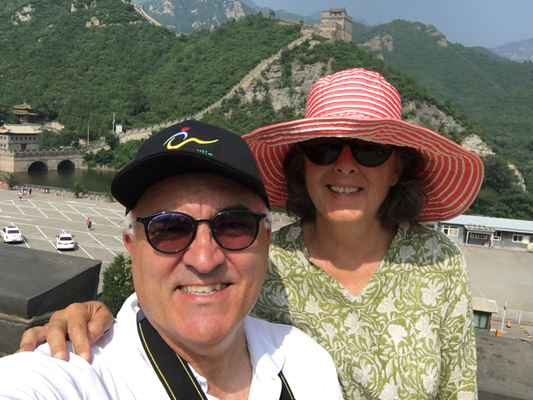 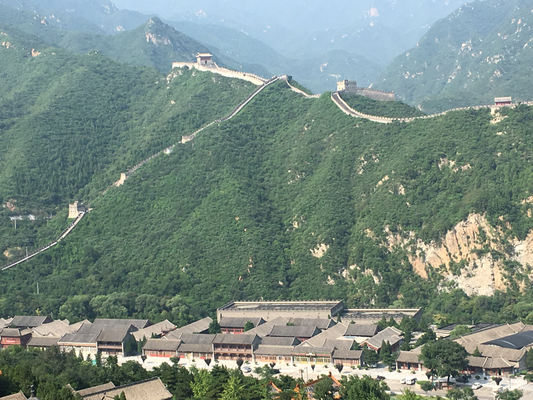 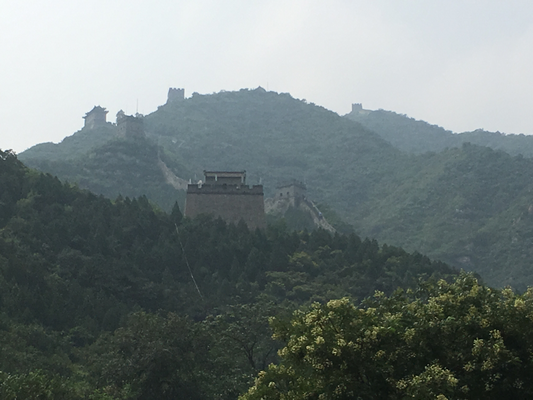 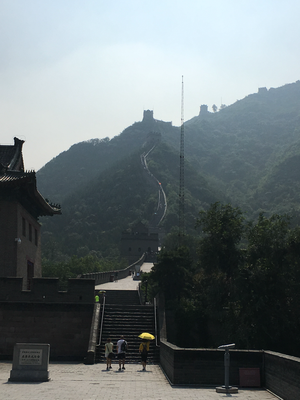 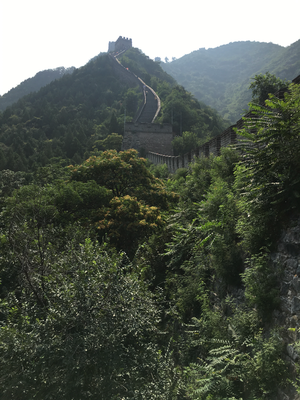 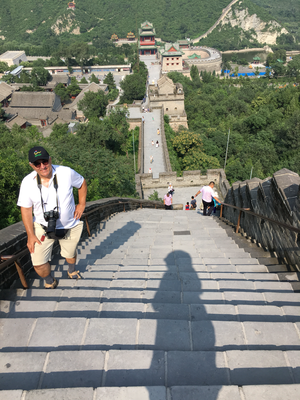 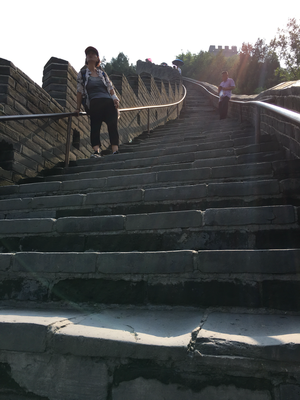 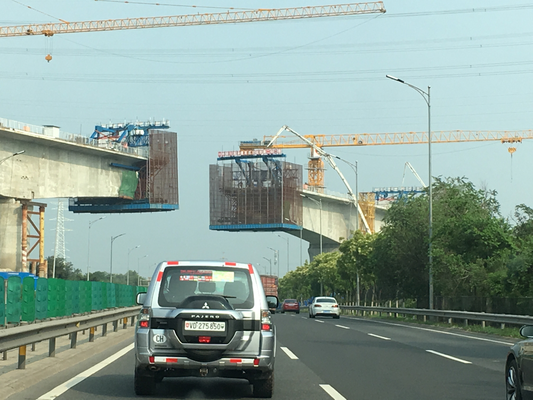 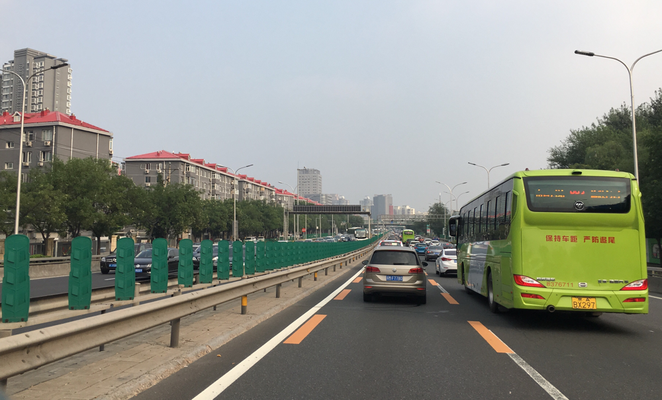 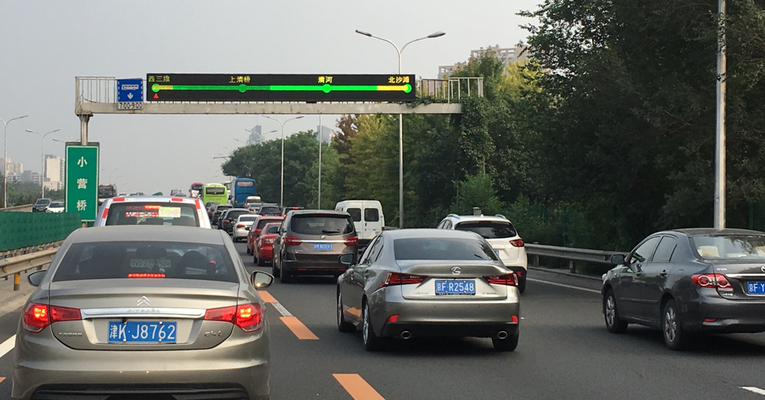 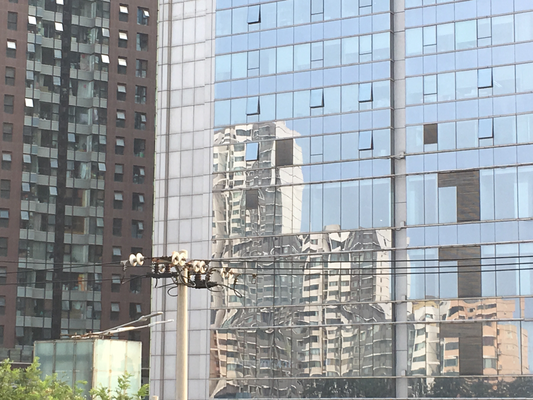 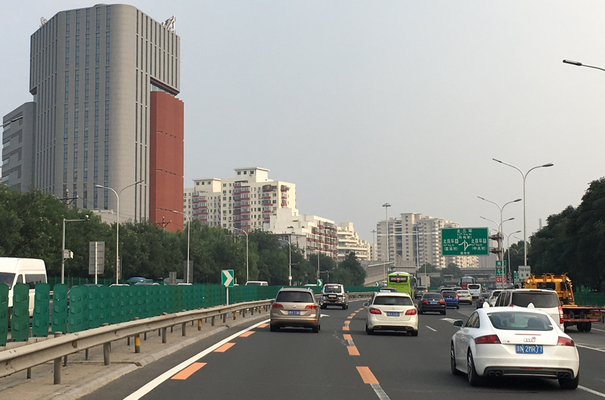 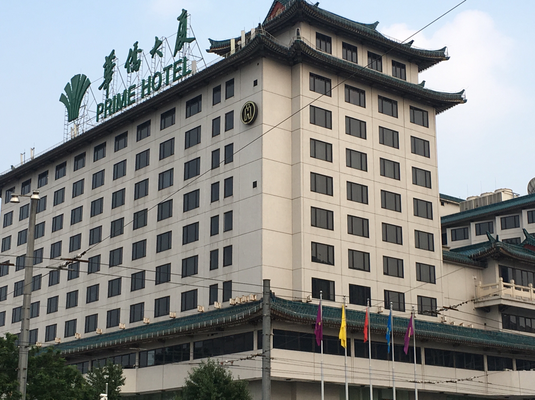 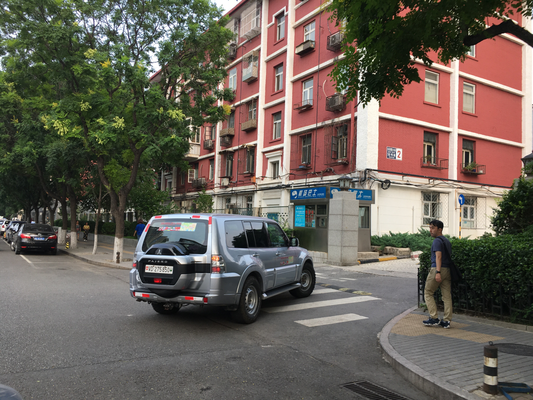 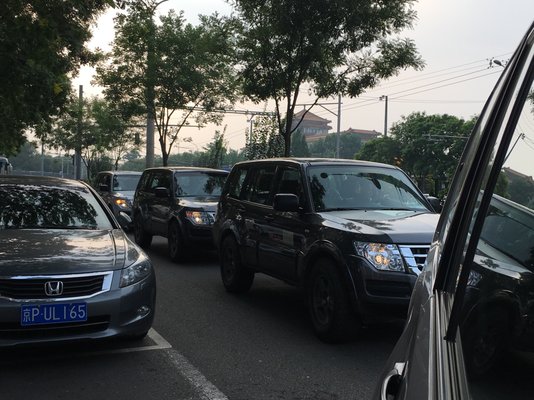 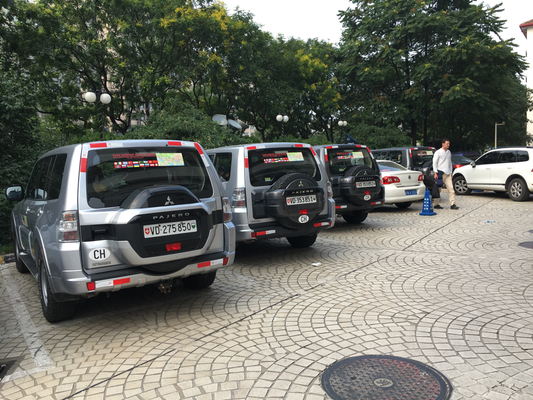 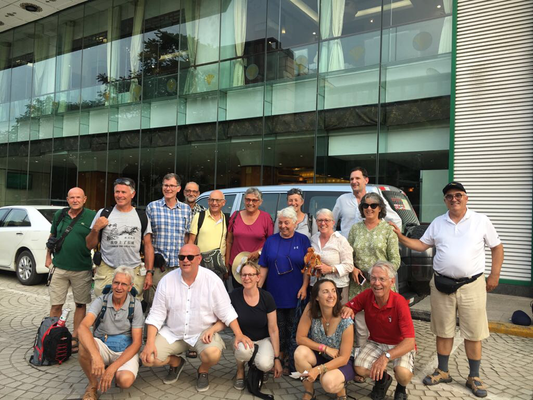 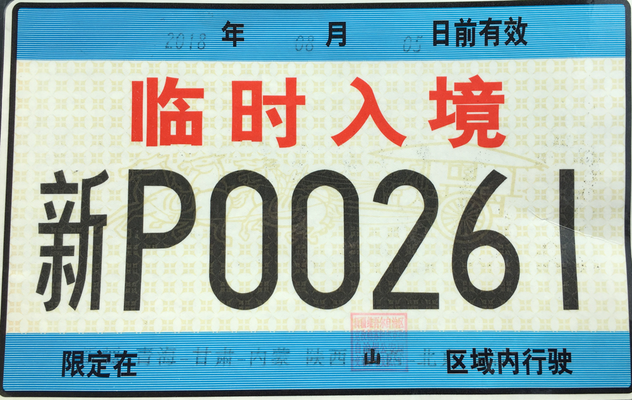 Today was our last day with the Samurai caravan. We crossed the Hebei (河北）province. There was a huge and stressful traffic jam on the highway which took nearly two hours before arriving at Juyongguang at the Great Wall for a stop. When we finally arrived, we first had lunch to get some energy. It was terribly hot and humid and we climbed a few high steps of the steep wall to get the feeling and to look at the beautiful forest and the panorama. This part of the wall is not so famous and therefore less crowded.

The Great Wall was begun during the Qin dynasty (221-207 BC), when China was unified for the first time. Hundreds of thousands of workers, among them a lot of prisoners, were building the first part of the wall during 10 years. It was enlarged during the Jin dynasty (1115-1234), when Genghis Khan was threatening China and completed and reinforced during the Ming dynasty (1368-1644), where it reached its peak. 2-3 Mio. people built it under terrible conditions and many lost their lives. It was home to 1 Mio. soldiers. As the wall lost its military effects, it served as a kind of elevated highway for transporting people and equipment. There was a beacon tower system, using smoke signals generated by burning wolves dung, in order to transmit quickly news of enemy movements to Beijing.

We reached our final destination, the Prime hotel, in Beijing in the afternoon. The traffic into the city had been surprisingly smooth. Yes! We made it, with no accident, no major injuries or illness. Thanks to the safe driving of our dedicated drivers, to the perfect organization and preparation by Claudia and Reisen und Kultur, to our local guides, especially Zhang who was elected unisono « Best tourguide 2018 », to the professionnal job of our fantastic minister of finance Hansruedi and to the great cooperation and friendship within the group.

We were welcomed by the Chinese partner agency with cake and wine and received a small tea cup as a present. Doris and Brecht’s son Sämi was there too with his Chinese wife and two little boys. They live in Beijing.