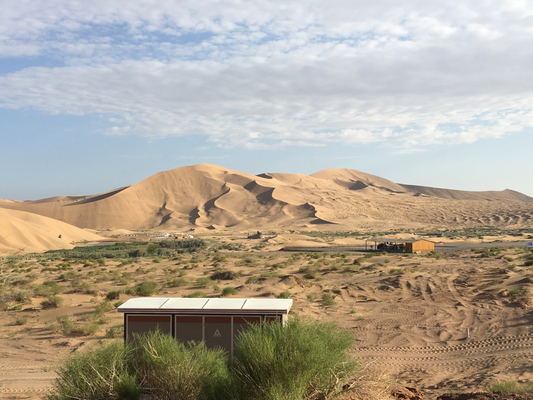 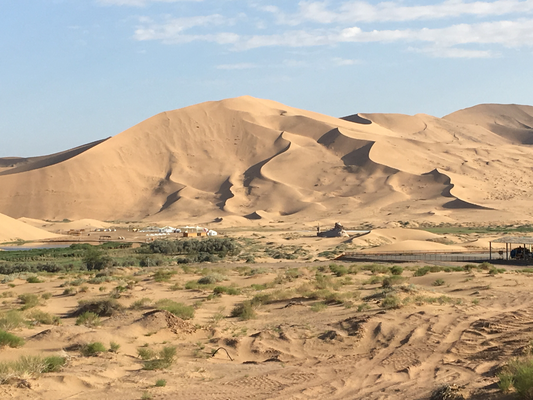 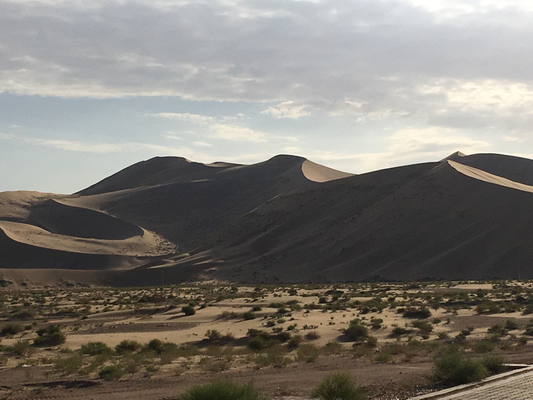 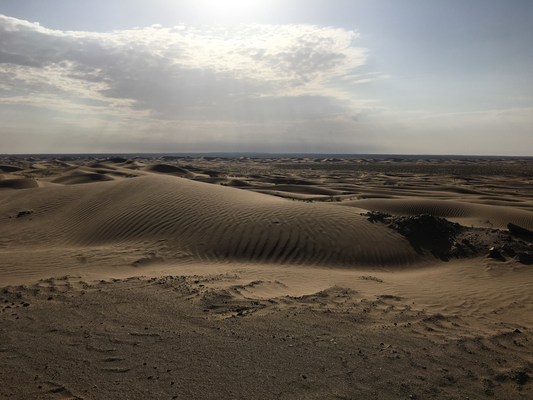 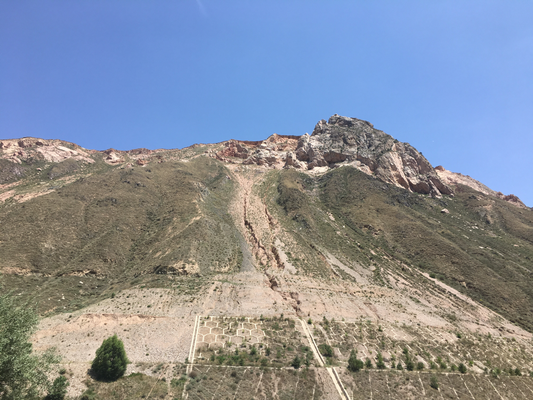 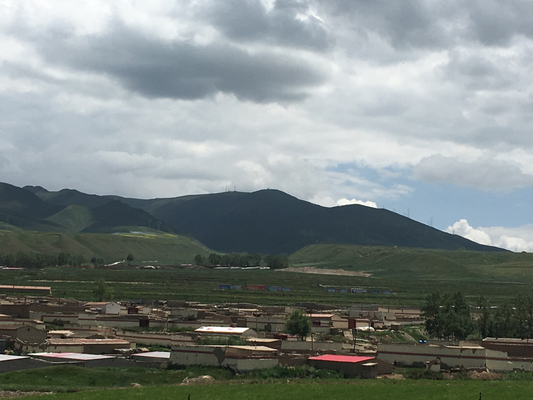 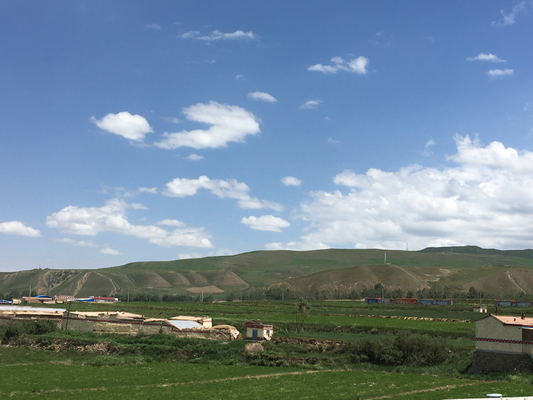 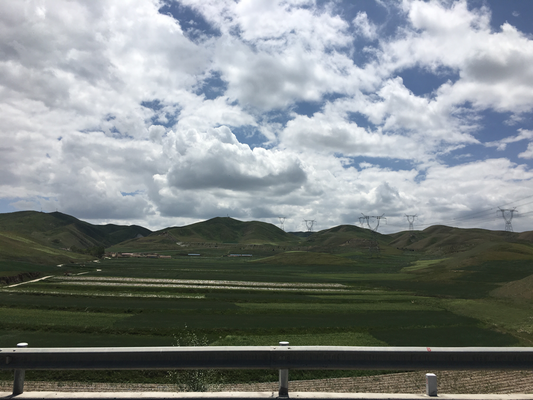 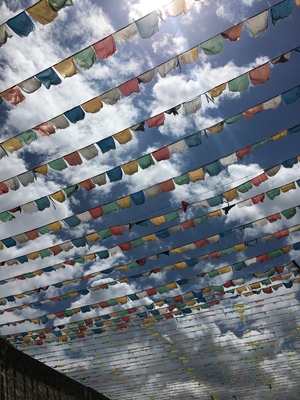 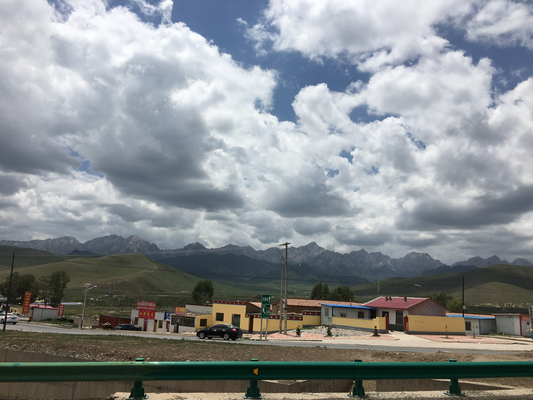 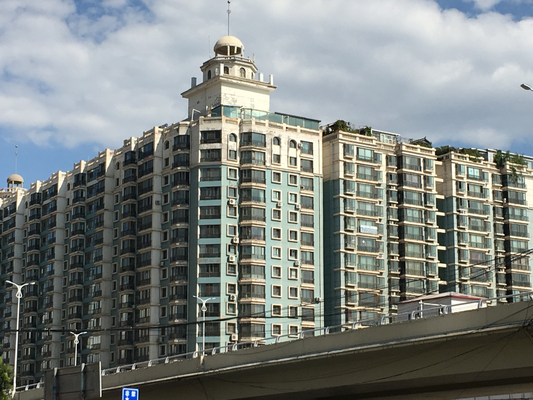 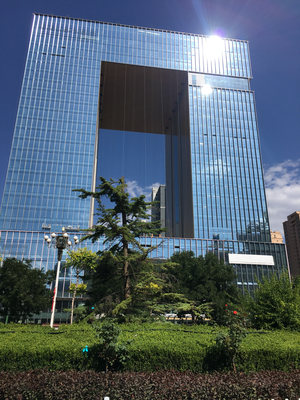 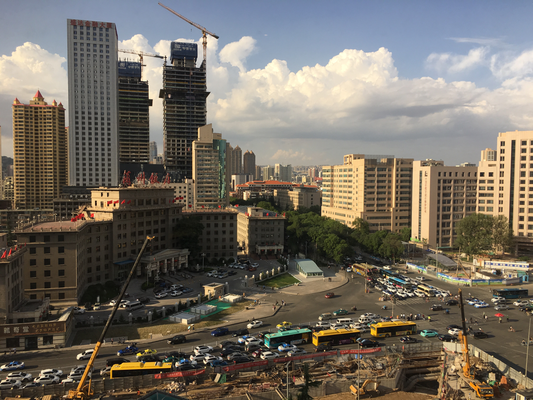 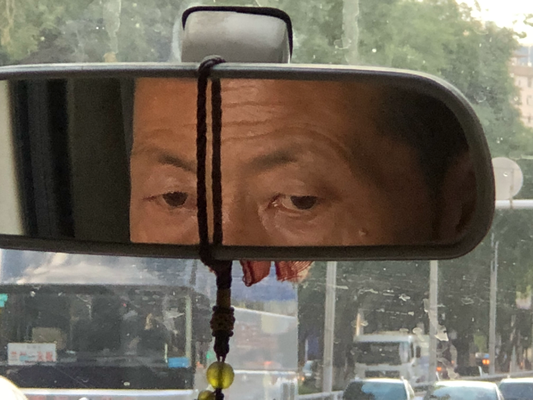 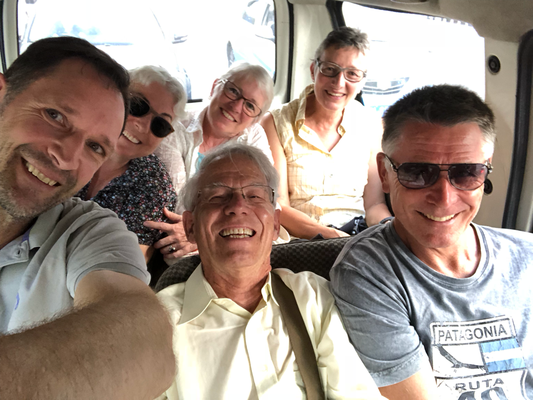 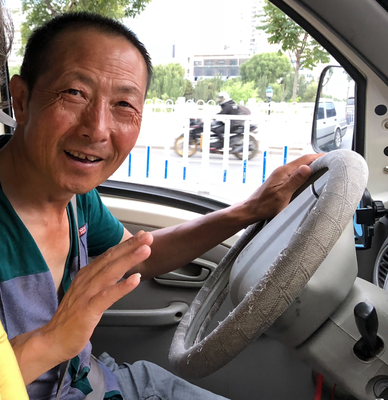 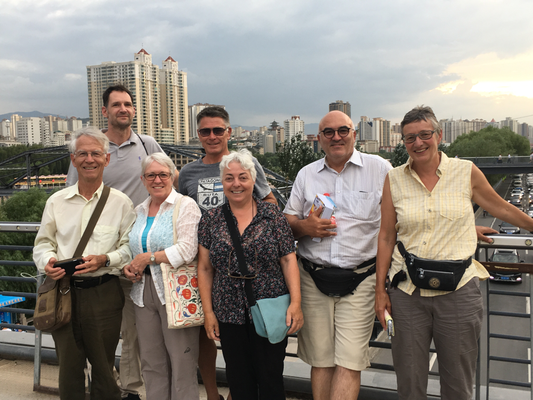 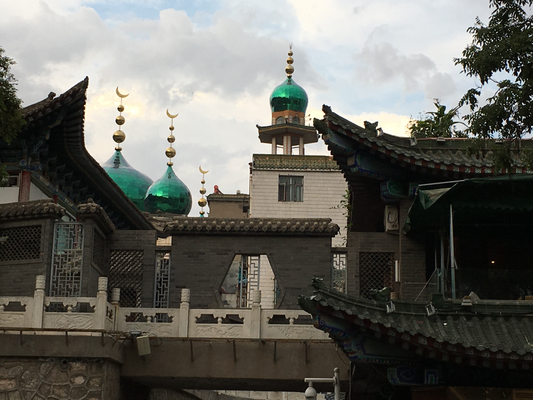 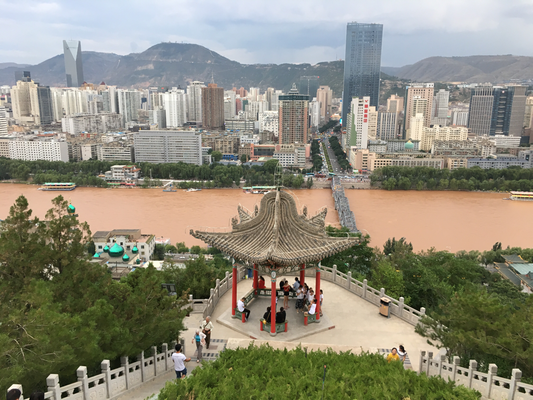 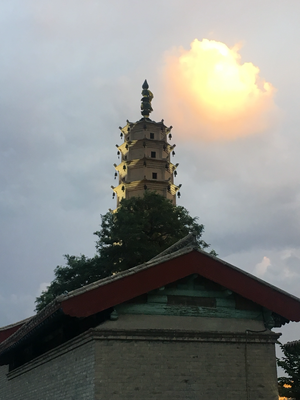 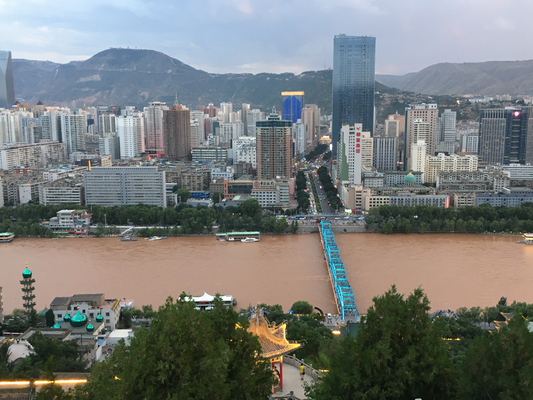 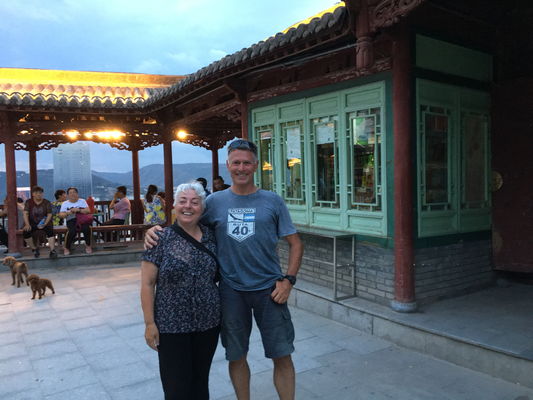 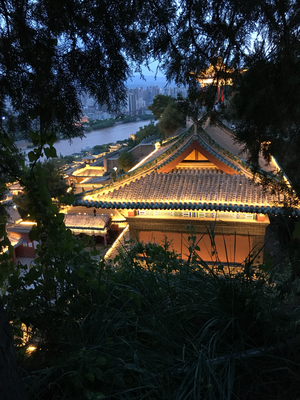 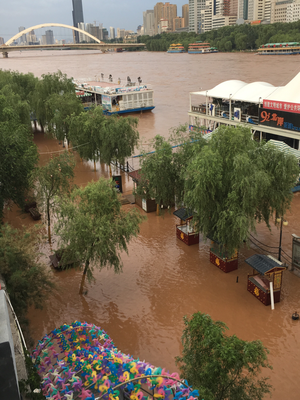 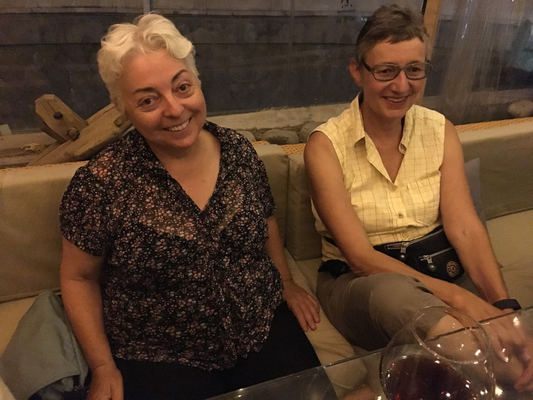 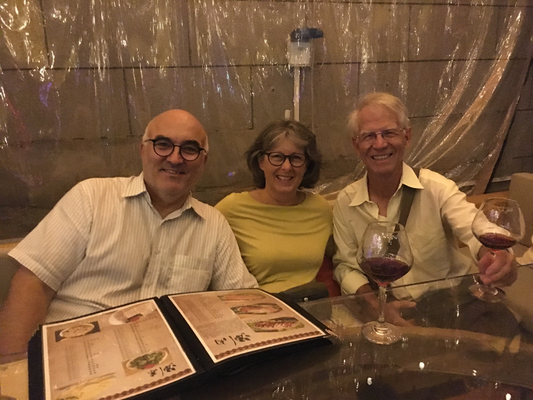 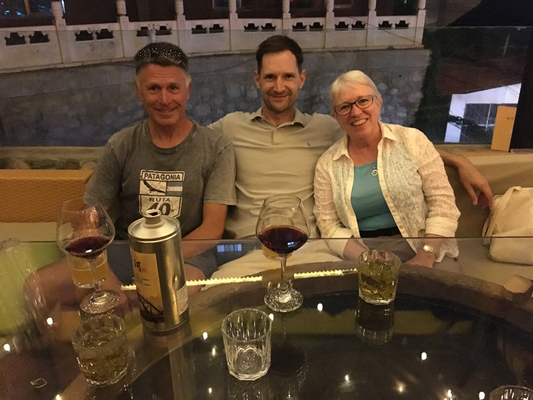 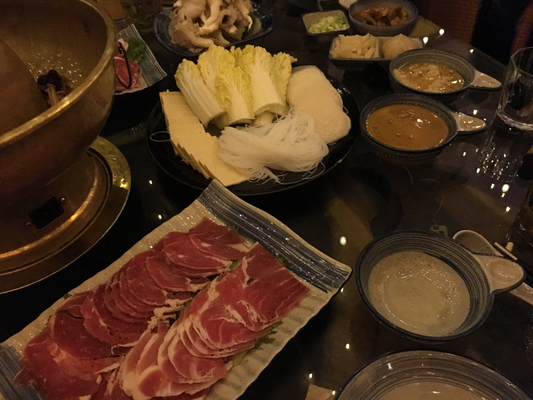 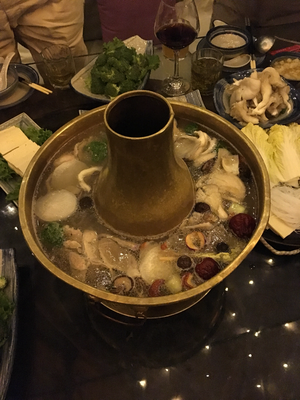 Today we drove through three totally different landscapes and it felt like a carousel for the senses. The desert looked beautiful in the morning light with clear skies and it was great to drive on the sandy roads. We left the Inner Mongolian Region and joined the Silk Road Highway until Wuwei. Then the highway was closed for a while and we took the road that led through agricultural villages. The scenery changed completely from flat ocher desert to green fields, various trees and mountains. It reminded us Switzerland. About 100 km before Lanzhou we could take the highway again. When we reached the city it was quite a shock. After two weeks spent in the desert and small desert towns, we have reached a bustling Chinese city with 4 Mio. inhabitants.

Philippe had a massage at the hotel and I went with six friends from the group to the White Pagoda Park. It was a challenge to get a taxi because it was rush hour. After 20 minutes finally a little bus stopped. He had room for exactly seven people and he drove us across the Huang He, the Yellow River, to the sightseeing spot. To our surprise Philippe was already waiting for us. As we walked on the bridge we saw, that the river carried a lot of water and that the shore was flooded.

Then we climbed the stairs and joined the pagoda on top of the park. It was a beautiful spot with great views on the city, the river and the skyline. Then we went down and had dinner on the terrace of a touristic restaurant. The food was delicious, we had a Mongolian firepot, and the service the best we had ever had. Nico had bought two bottles of very good red wine (in China you bring your own wine to the restaurant). Our young waiter took a look at the bottle and came with a carafe and nice glasses. For better communication, he used a translation app. He brought additional drinks like beer and tea. We were already enjoying our drinks and were ready to order food. Then the waiter comes and tells that the kitchen is closed. It was only 21:00. We told him that this was a great pity and that we would order something very simple. It didn’t take a long time and the cook agreed to prepare the Mongolian pot for us. It was tasty and Philippe was happy to have at last some non-spicy good food.