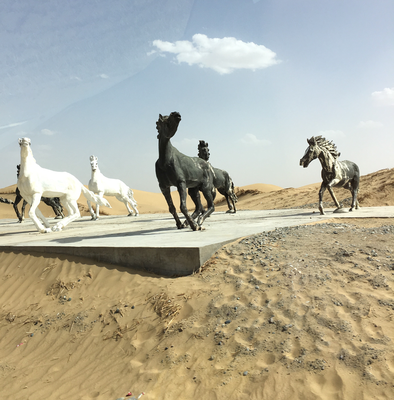 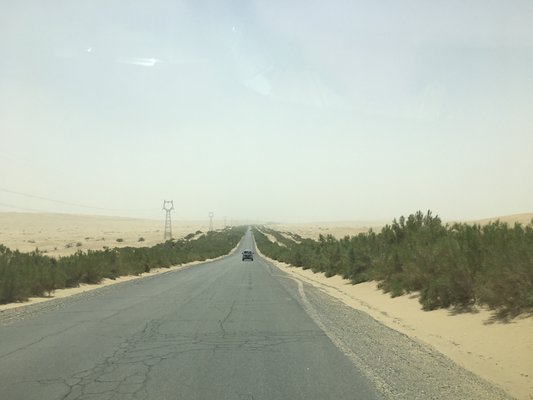 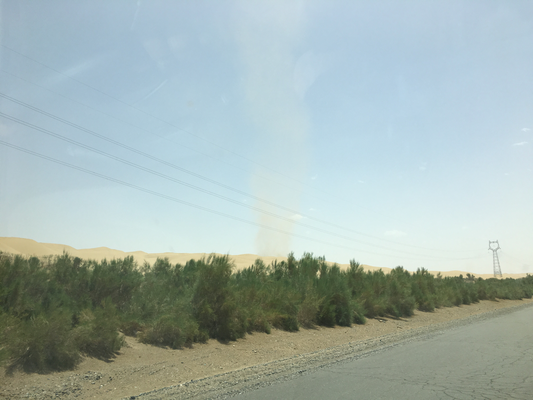 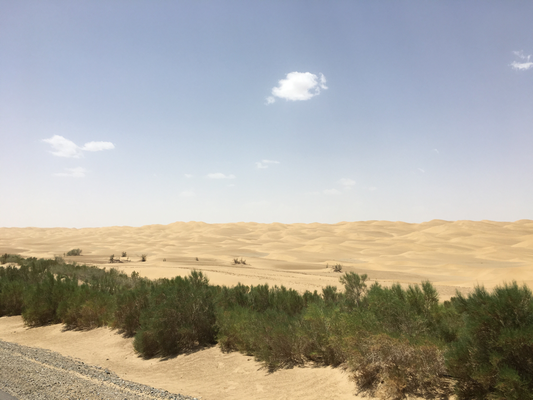 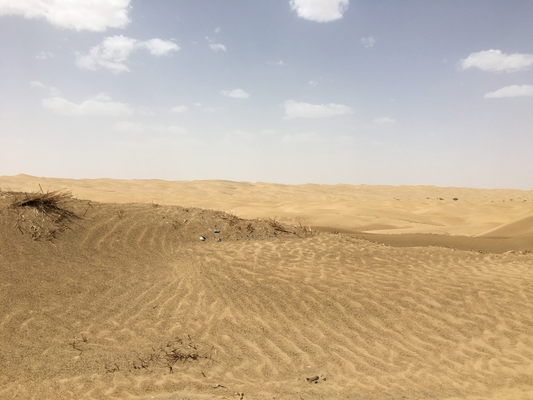 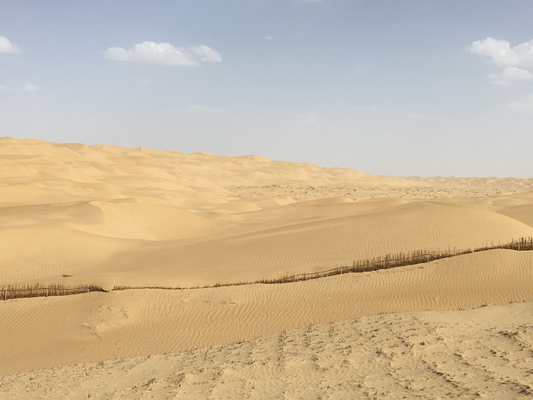 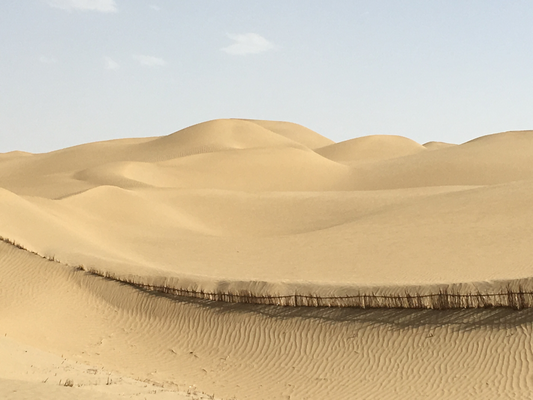 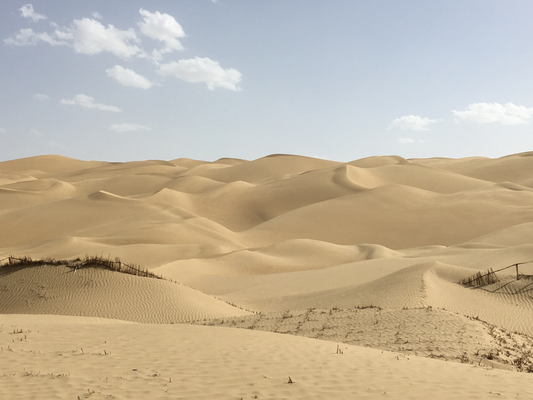 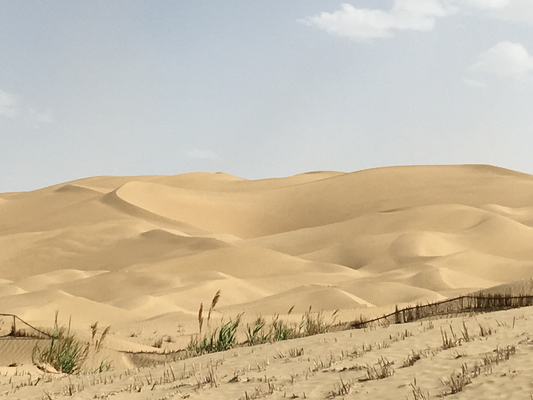 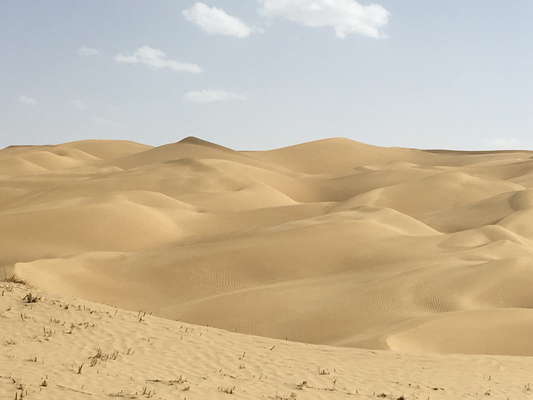 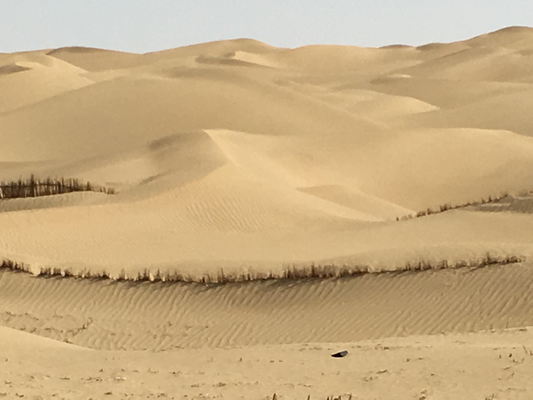 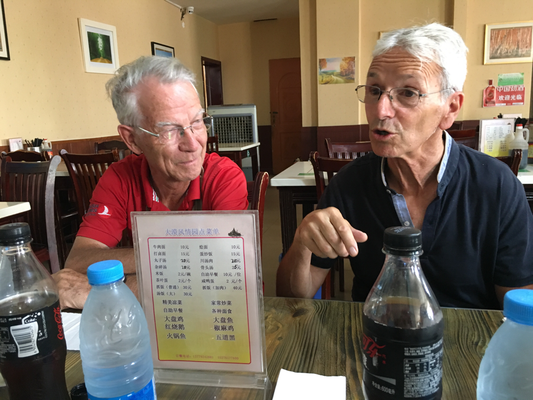 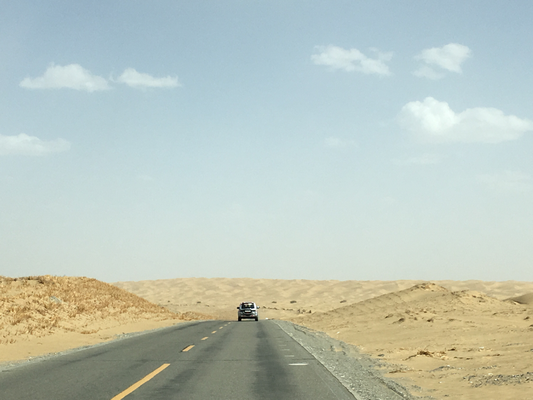 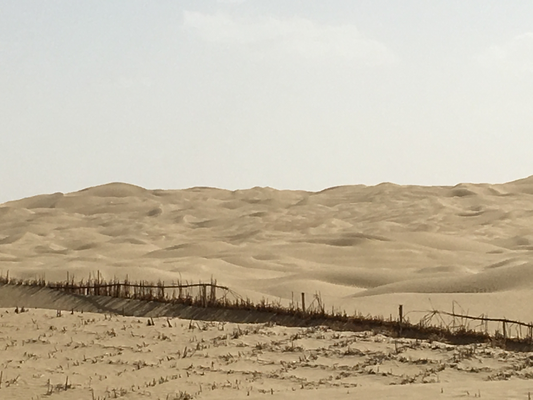 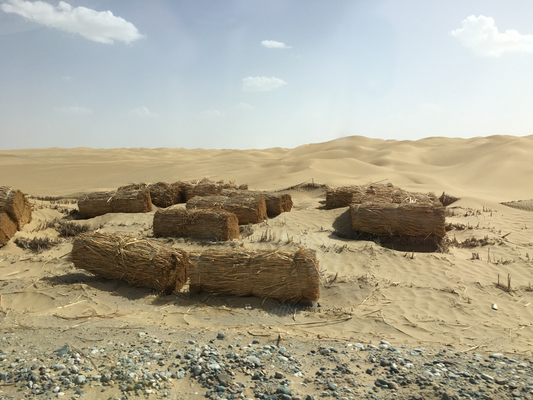 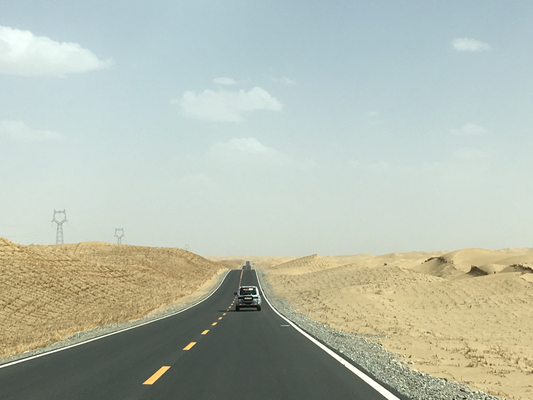 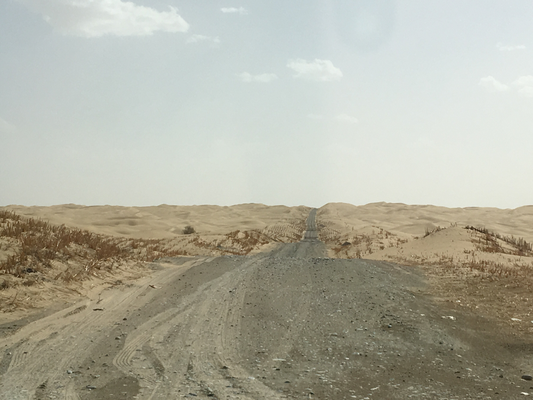 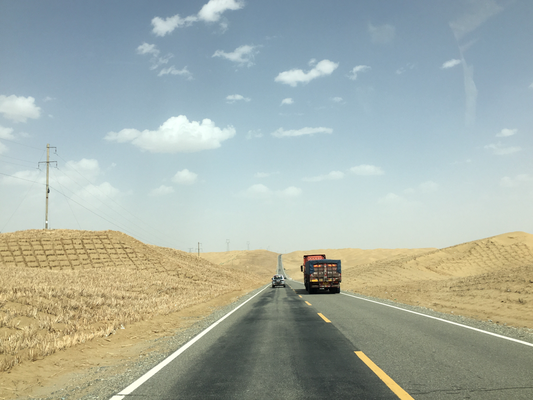 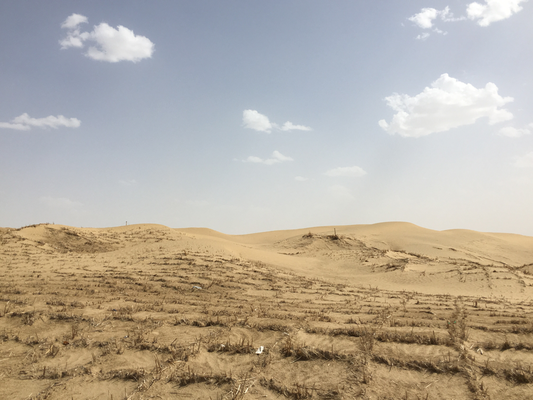 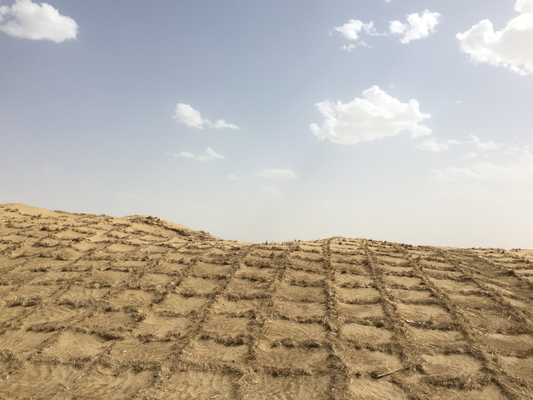 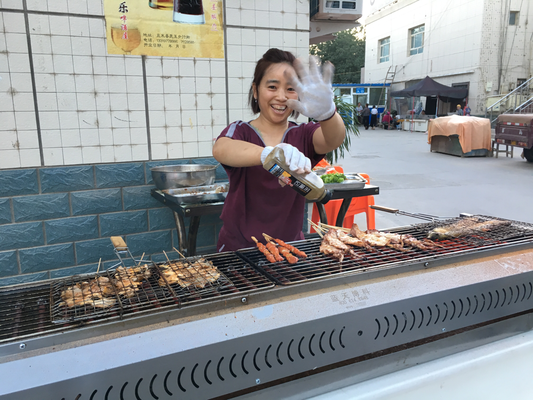 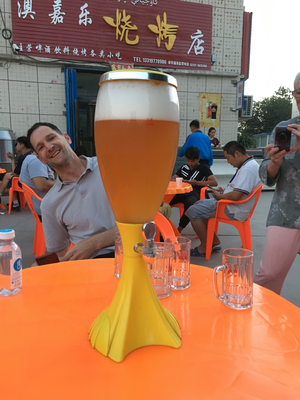 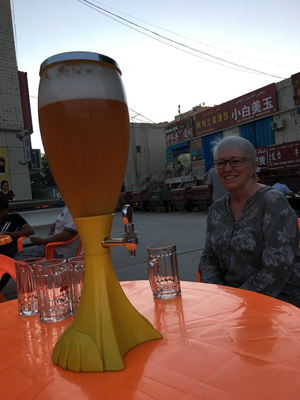 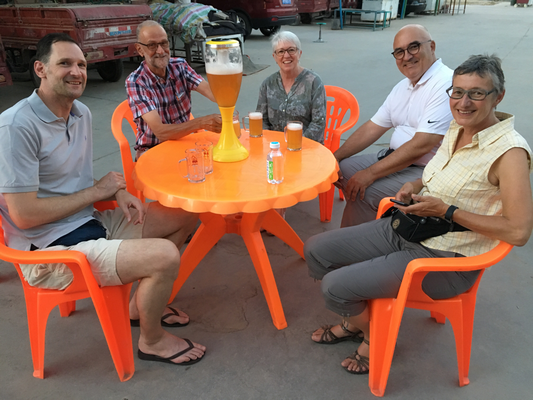 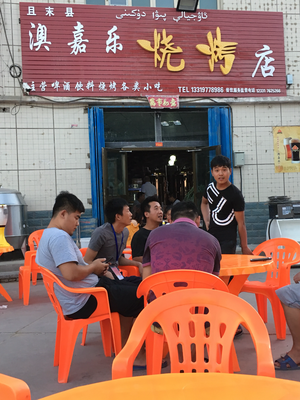 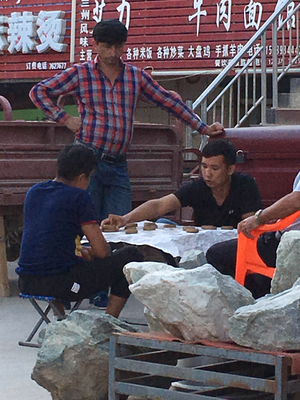 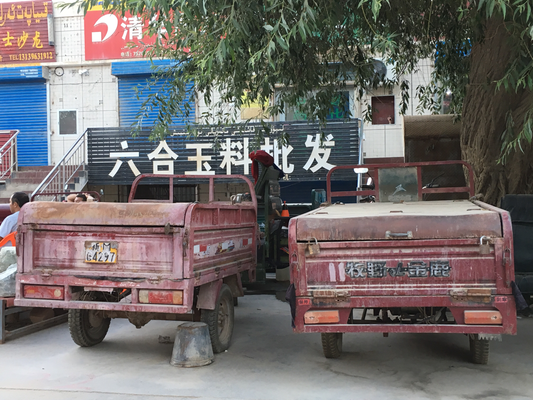 We entered into the Taklamakan desert passing many metal or propan gas/oil plants. At a gas station, we filled up the cars with diesel to make sure to get out of the Taklamakan! Fuel stations in the Province of Xinjiang are all behind well guarded closed gates and without our guide Chang we would be lost. This time only the drivers were allowed to go inside, the passengers had to stay  outside and ask for permission to go to the toilet. On the way we passed again several security checkpoints too. Again without Chang an impossible mission. Two times they took a picture from everyone. The electronic transmission of forms seems to be very complicated or doesn’t work. That’s why they fill in everything by hand and it takes up to two hours each time.

Taklamakan is an Uighur name. For a long time the meaning was ”once you enter, you never come back”. More recent research says, the name comes from the Turkish and the Persian language and means “land of poplars”. Another meaning is “garden of the desert“. Apparently there were poplars in the Taklamakan basin until the 6th Century. Nowadays they are only at the edges and in the oasis.

The surface of Taklamakan is roughly eight times the size of Switzerland, slightly smaller than Germany, and it’s the world’s second largest sand desert. Crossing the desert on the route 165 is roughly 550 km. About half of it is along three lane rows of thick watered pine bushes on each side of the road. They keep the sand off the road, but unfortunately they hide the view too. After lunch the road was new for a good part and sand was kept off the road with rice straw and reed structures. We had great views on endless yellow dunes and as the sun got lower, the shadows gave more contrast and it was even more fascinating.

We stayed overnight in Qiemo, a small lively city with many shops along the streets and an impressive presence of police too. In the evening we walked down the street and asked a young Chinese couple if they knew a place where we could have a beer.  They walked with us and showed us a brewery, where they also made tasty chicken and veg skewers. They were extremely friendly and we enjoyed a peaceful evening in a quiet courtyard after an exhausting day in the desert at the temperature of 40 degrees.